Mary Poppins: Behind the Curtain

Random musings from the director about building a production... 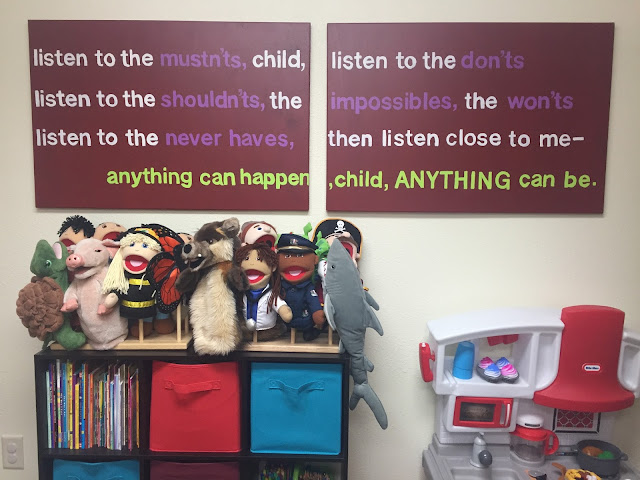 There's a darling song in Mary Poppins called "Anything Can Happen." I painted this Shel Silverstein poem on canvas for my office many years ago. Little did I know how serendipitous it would become! 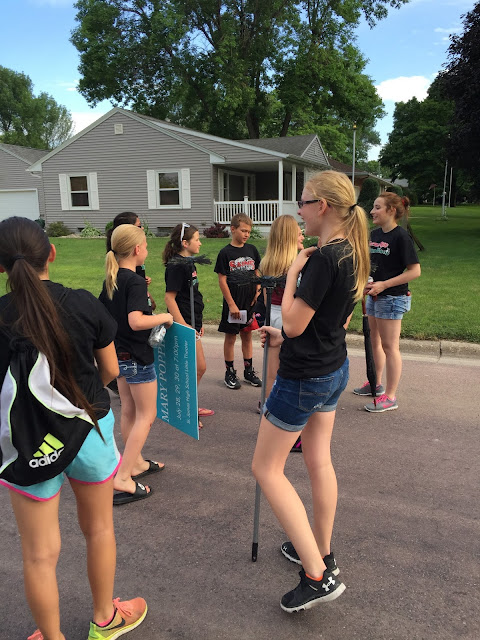 Children's Theater kiddos walking in the Railroad Days parade. It's a fun wrap-up after their performance weekend and a great way for us to advertise for the upcoming musical each summer. 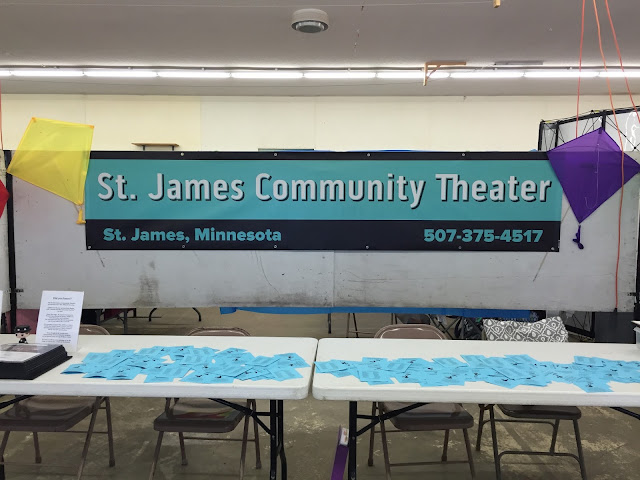 We set up a booth at the Watonwan County Fair this year to promote Mary Poppins. It was also a perfect excuse to bring along our archive of past productions and hear what the program has meant to people over the years. 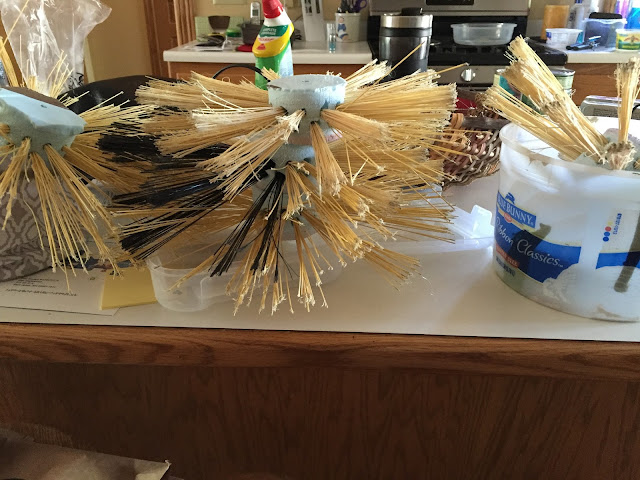 Chimney sweep brushes under construction. Many brooms were harmed in the making of said brushes... 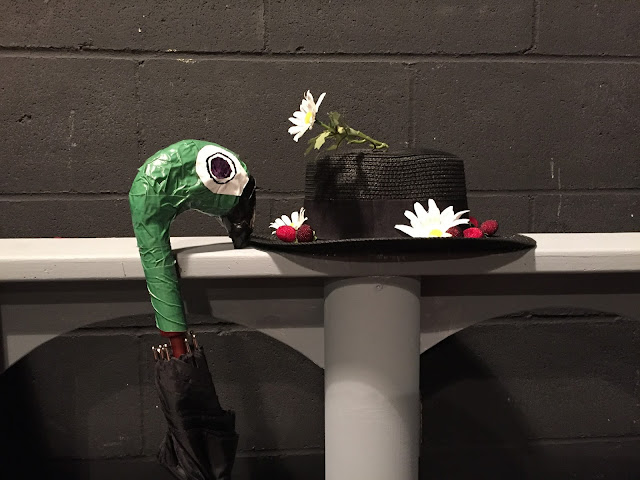 Deb working her usual magic with some green duct tape and a Sharpie. Two iconic Mary Poppins costume pieces that we just HAD to recreate! 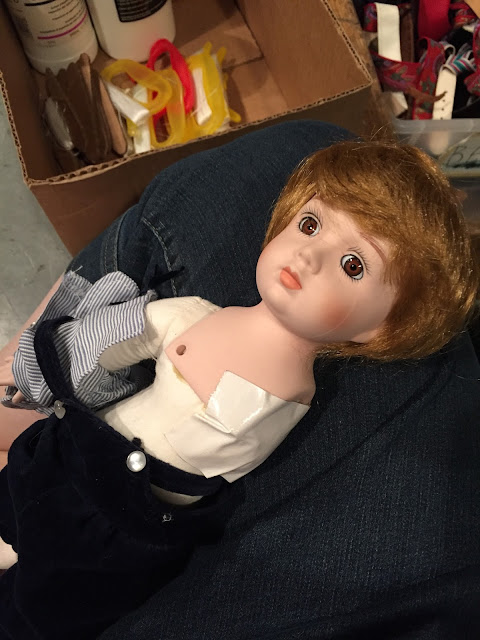 Does it make me feel a little evil to amputate a porcelain doll for a prop? Yes, yes it does. 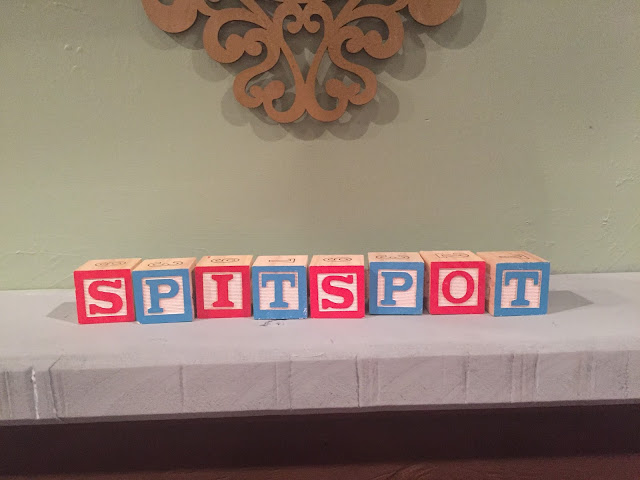 One of the many silly things that I put time into that can't possibly be seen from the audience. I find it delightful anyway. These blocks were velcroed together and only revealed when Mary cleverly flips them around on the nursery room mantel. 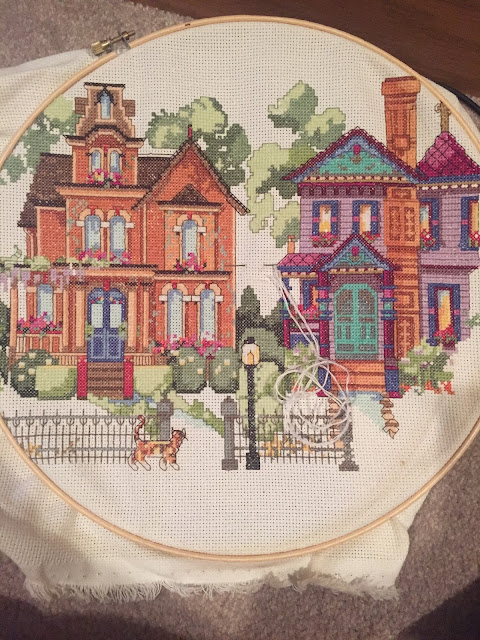 We're often looking for ways the actors can occupy themselves onstage (in character) when they have time to kill in a scene. I wanted Mrs. Banks to have some sort of embroidery piece. Fittingly, Deb had a cross stitch underway from years ago of these Victorian houses. The perfect time period! These plates were a lucky find on Amazon because I was able to double stick tape them into our trifold hutch. The gloss on them made them seem so real that some of our stage crew didn't realize they were paper until after the show wrapped. 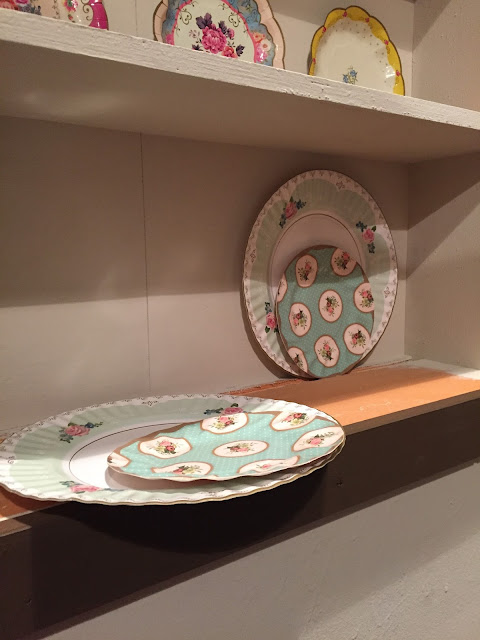 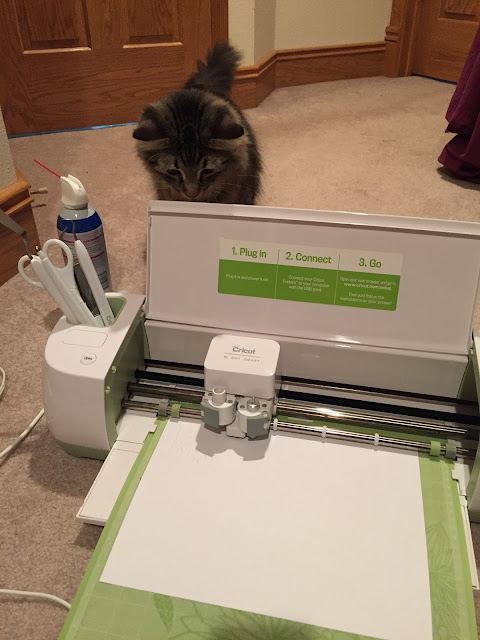 I've relied on this Cricut for the past three summer productions to make easy work of set dressing and props. This cat didn't come with the Cricut, but she's vigilant and "helpful" nonetheless. 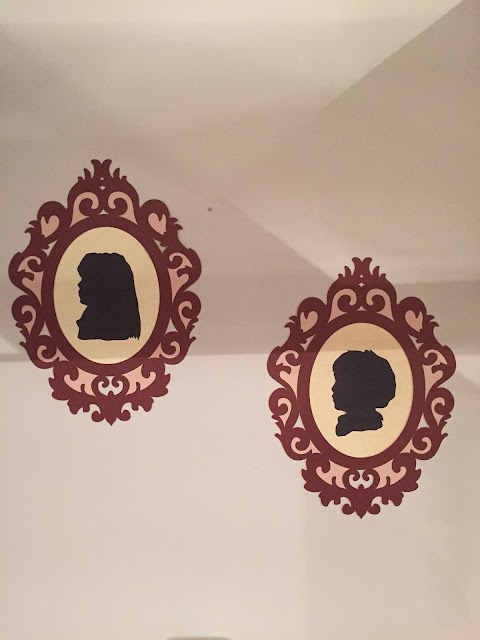 Easter egg! These silhouettes of Jane and Michael in the Banks' family parlor are actually my brother and me. I just made some copies and created Victorian frames out of cardstock. 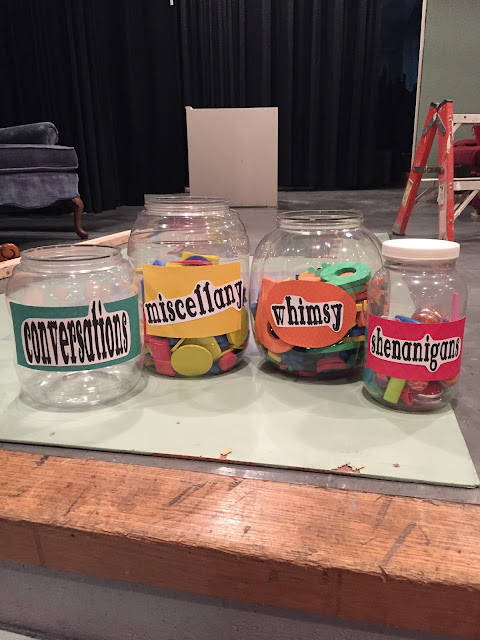 I created these jars of nonsense for the Supercalifragilistic shop in the park. We're all out of conversations. And you'll notice the jar on the right full of bouncy balls and kazoos is the only one with a lid. I didn't want those shenanigans escaping into our young actors' hands or all kinds of mayhem would have broken loose! 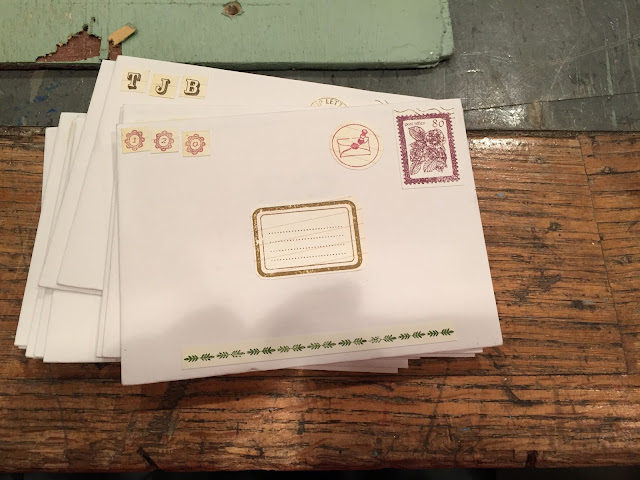 Another detail that I took much delight in creating even though it wouldn't be seen from the audience. Mrs. Banks' rejected invitations. 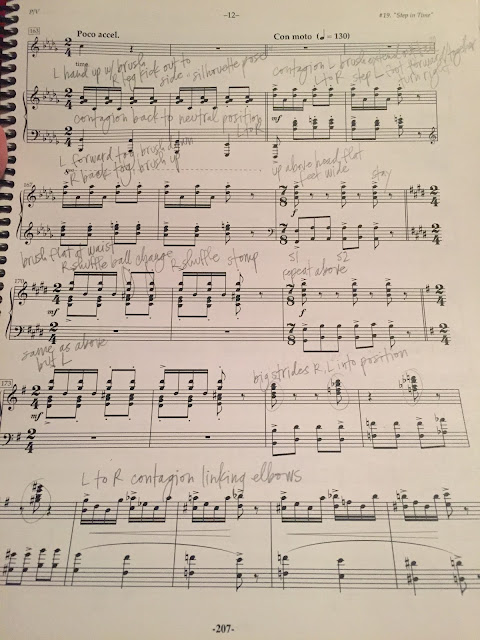 Typically, this is how I spend my lunch breaks at work during the summer. Coming up with choreography and hoping no one spots me doing jazz hands through the window... 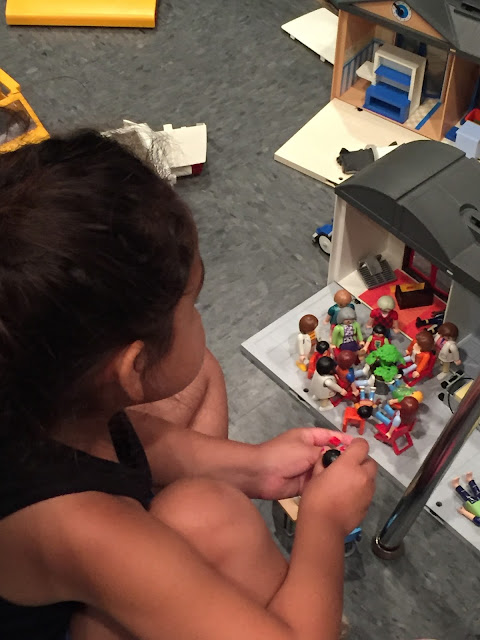 We had quite a few little ones in Mary Poppins so I made sure to keep them occupied with toys from my office. I'm not sure what these Playmobil people are meeting about, but they certainly look supportive of one another. I like that. 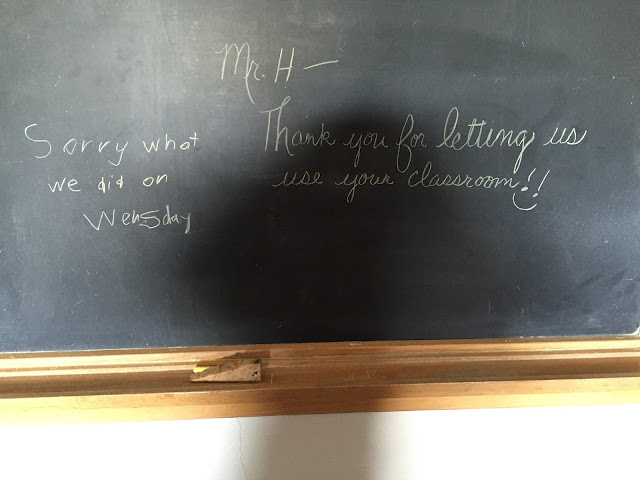 Rehearsals in our final weeks often run late and our smallest cast members eventually get squirrely, no matter how many toys we have handy. Fortunately, they were quick to apologize for their hijinks in Mr. Hildebrandt's room one night (which was their makeshift playroom). Hopefully, he forgave them after this little message. 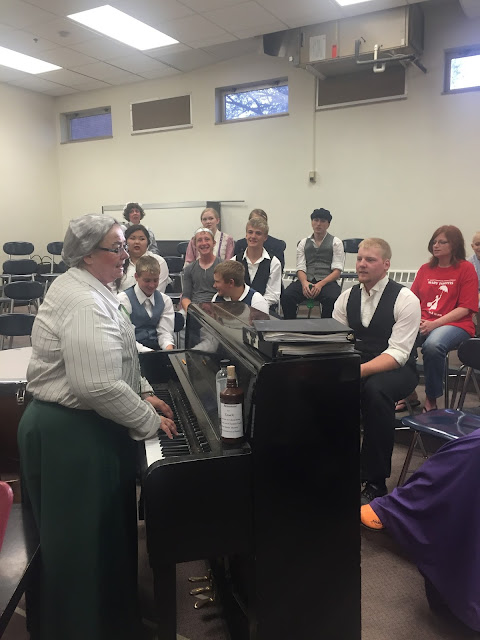 It was such a delight having Sandy Sunde lead our vocal warm ups before the show each night! 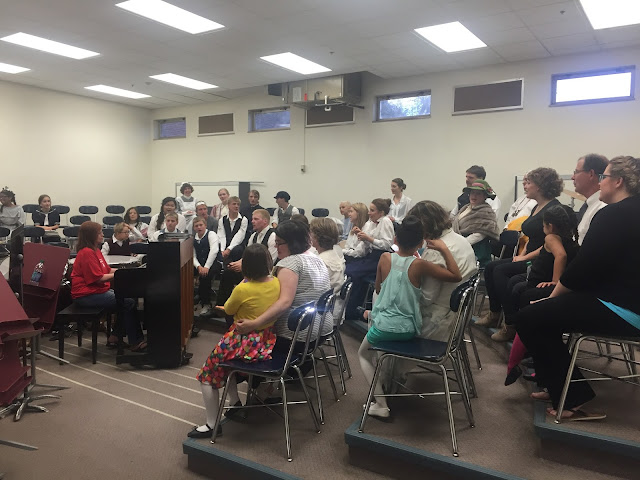 I love this shot of our cast warming up together. It's a lot of work keeping track of such a large group, but all the bonding between family and friends makes it worth it in the end. 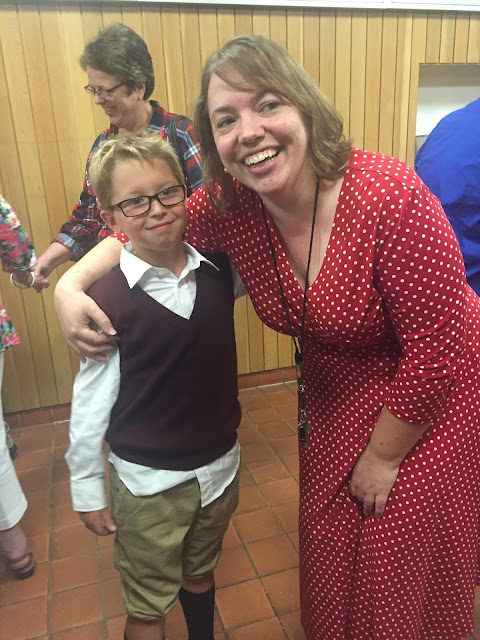 Michael Banks (a.k.a. Riley) was a constant source of energy and comic relief. Right after this was taken, I asked him if he wanted to keep one of his props (an elephant or teddy bear) as a memento from the show. "Could I have the sword?" "You mean the queen's sword?" "Yeah!" "If your parents say it's okay, then yes, you can have the sword." Oh, buddy! 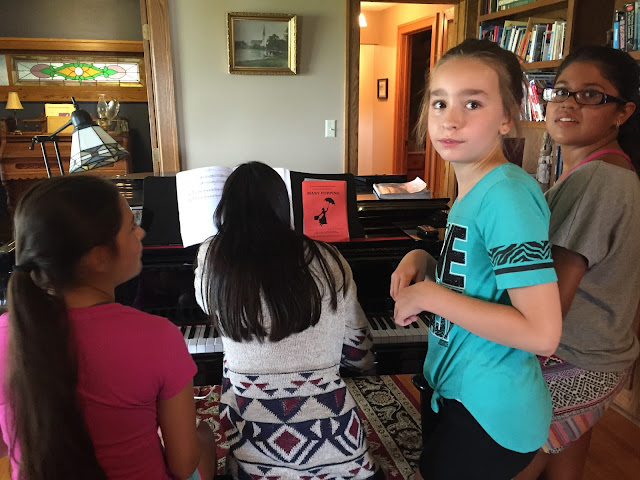 Some of our girls gathering around the piano at the cast party. They pulled out the Mary Poppins score and relived their favorite songs. So funny how we're nostalgic for a play even before it fully wraps. I'm sure these songs will be stuck in our heads for the next hundred years! 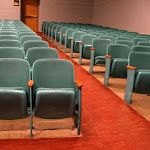